Been too busy working with the house/ garage projects to keep the blog updated.
And, I haven't had much time to go riding either.

But, I made the Skosløpet this year, although I went alone since neither the K-750 (Dnepr) or the rider(Eva) was ready for the 1100+ kilometer weekend ride.  After working overtime and a visit to a customer to sign some papers, I finally left the customer located outside Oslo at 20:00 in the evening.
It rained pretty bad from Jevnaker until Lillehammer, had to follow a trailer to stay on the road.
The riding boot is no longer waterproof, but the gloves did keep the rain out for a long time.
From lillehammer the rain got lighter, and it stopped raining when passing Tretten at midnight.
Since I was already wet, I decided to keep riding.  It really doesn't get real dark early in the summer, but there could be more critters (moose etc.) on the road.
Due to the wet pants, going over the Ringebu mountain was painful. The legs got so cold I could feel stings.

Arrived at the rally site at 02:30.  I brought my summer sleeping bag, so it was some really cold 3 nights in the tent (not a trekking/ mountain tent either..)

But the rally/ meeting was very good despite the rain and cold weather.  We stayed clear of the rain on the saturday rideout, and the wet gravel roads were a delight to ride on.  Alhough it was a bumpy ride for those riding bikes without a proper rear suspension. The chief's plunger suspension works pretty good.

Some pictures from the meeting.

Restored BP gasstation from 1955(?) just outside the rally site, used for rally registration.


Some of the late model indians present, up in the mountains during saturday's ride:

about half of the "second floor" was done, and 3 windows installed.
Hope to get the second floor and start installing the drywall in the first part of this week. But need to insulate the roof first I think.

Got the garage man door installed, and 2/3 of the wall insulation is in place.
Also picked up 3 windows to be installed over the next few days, if my time permits. 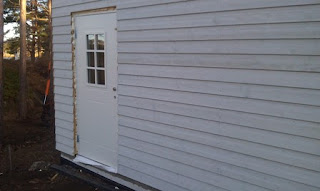 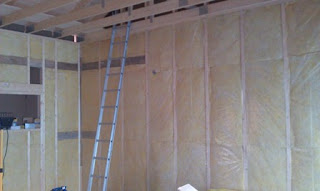 First ride of the season!

Well, actually I rode in Florida/ California in early February.. but today was the first day riding here in Norway this year.

The chief ran pretty good, but I think it wants more fuel.. and the foam type airfilter is restricting the intake.
It sounds gorgeous from the saddle..

A short video of the chief with the new cams.

Opened the motorcycle garage door for the first time in months.  To keep the heat inside, the garage door was sealed using screws and ducttape..
The weather is supposed to get warmer next week, so I hope for an early spring.  I may ride a short bit this weekend, but since the generator isn't charging I can't go too far with lights on.

Still need to do some adjustments to the ignition timing, and I will need to check if the jetting is ok.

Some updates on the garage.
Most of the siding is now done, put in quite some hours in the weekend plus 2 evenings.

Building the car garage ..and workshop.

Our house was built around '54 -'55, and then extended 2 times later.
The last extension was in the early 1980's where they also added a single car garage in the basement.
While this garage turned out really nice after a lot of work, there's no room for a car anymore.  The garage is now a motorcycle workshop.

We are going to change the looks of the house over the next 1-2years, and at the same time we (I :) ) decided to add a new double car garage. Available space was limited, so the footprint of the garage was limited.  So we decided to build up instead, and install a lift to store the third car.

Apart from some of the landscaping/ leveling, we will do most of the garage build ourselves with help from family and friends.  So we have to do this on evenings and weekends, since we both have daytime jobs.

But first we had to spend a lot of time making a foundation for the garage, since the backyard is sloped.

And then we also needed to level the backyard and make a new sloped driveway..
The excess dirt and rocks was pushed into the lower part of the backyard, we will later lift and level the whole backyard.

Then the driveway was was filled with course gravel and then fine gravel, and compacted several times.

And luckily, we managed to pour and polish the concrete floor on the absolute last possible day.  The frost set in the following day.

After one and a half months of really cold weather, we got the precut framework/ roof trusses delivered just before Christmas.  It was -18 degrees celcius outside, so the crane on the transport truck was causing problems for a while.

The garage build was started on January 1st , and most of the framework was up within two weeks.

Quite a bit of snow came in January, so it was a pain to keep the buildsite clear of snow..

Theres a porsche 911 somewhere under the snow...
The roof was then built, and the walls covered by windproof/waterproof boards.

We managed to get the roof covered just days before I went on a 3 week business trip/ vacation to Florida/California..and got the Porsche out of the snow...

4 weeks later we started working on the garage again, preparing for the outside wall siding and the inside drywall/sheetrock.

We managed to cover 2 1/2 walls last weekend, after some long days of working.  The garage doesn't have a very large footprint, but it's tall. The wood boards are primed impregnated "vestlandskledning) horizontal boards.

Sunday evening at 22:30,  nailing the last anglecut board in place...tired after climbing the ladder the whole weekend..
﻿